A £7 MILLION package of maintenance and repairs along the M6 near Carlisle in Cumbria, has been unveiled by Highways England.

The work, lasting from April to August, includes resurfacing the main motorway carriageway, upgrading the roundabout at busy junction 44 and installing an improved noise barrier in the area.

The series of separate improvements is being carried out as one project to minimise disruption to drivers, similar to work completed along the A66 Eden Valley around Penrith last year.

Junction 44, where the M6 meets the A7 and A689, is one of the busiest in the county and provides access to the motorway network for several retail and business parks as well as distribution firms. 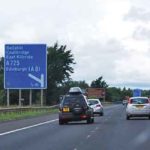