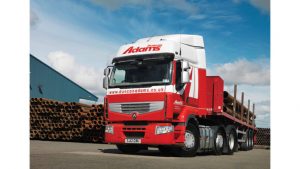 Staff and unsecured creditors of Grangemouth haulier Duncan Adams did not receive any money owed to them before the company was dissolved last week, writes Chris Tindall.

In a final report from administrator Deloitte, it said there had been insufficient realisations to enable a distribution to these creditors after the company entered administration in March 2017.

At the time, the move led to an immediate 132 job losses.

Deloitte said it had not been possible to trade the business, which was established in 1960 and was considered to be one of the largest privately owned haulage companies in Scotland.

As a result, steps were taken to wind it down and focus on maximising asset realisations.

More trucks on A75 road than the Scottish national average

There are almost 50% more trucks using the A75 between Stranraer and Gretna than there are on average across the Scottish Trunk Road Network, according to the Scottish Government. A Freedom of Information (FOI) enquired […]

Increasing the speed limit of HGVs to 60mph has had no impact on safety, according to a UK government report. Issued by the Department for Transport, the report is the third and final assessment into […]

The Scottish Government has expressed its gratitude to the haulage industry in Scotland and its support network for continuing to work through the coronavirus pandemic to ‘ensure food, drink and other essential items remain available’. […]