Still family owned, Scotland’s biggest haulage company now has its fourth generation actively at work in industry leading construction, warehousing and logistics operations. With the ultra-impressive Donald Malcolm Heritage Centre as a backdrop, CEO Andrew Malcolm outlined his group centenary strategy to Alistair Vallance. BACK IN 1922, when Walter Hattrick Malcolm plodded round Renfrewshire selling coal from his horse and cart, little did he know that 100 years later, his name WH Malcolm would be a brand name for the biggest road and rail transport operation in Scotland and the north of England.
Unfortunately he passed away when his son Donald was just nine years old and he had to leave school aged 13 to take over the business alongside his mother.
Donald went on to build up the Malcolm Group towards what it is today, starting with road transport, then a burgeoning construction division. His younger son Andrew joined the business aged 16 and obviously became totally engaged. He was instrumental in forming the logistics division, thus further enlarging the activities of the huge family-owned company which is now celebrating its centenary year. 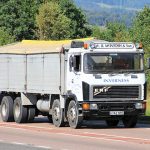 Tippers Through The Decades 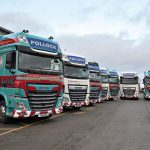 Profit For Pollock Despite Pandemic 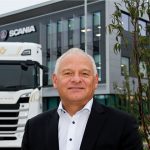 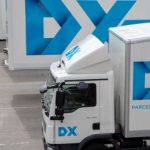